Tackling Climate Change is Our Responsibility 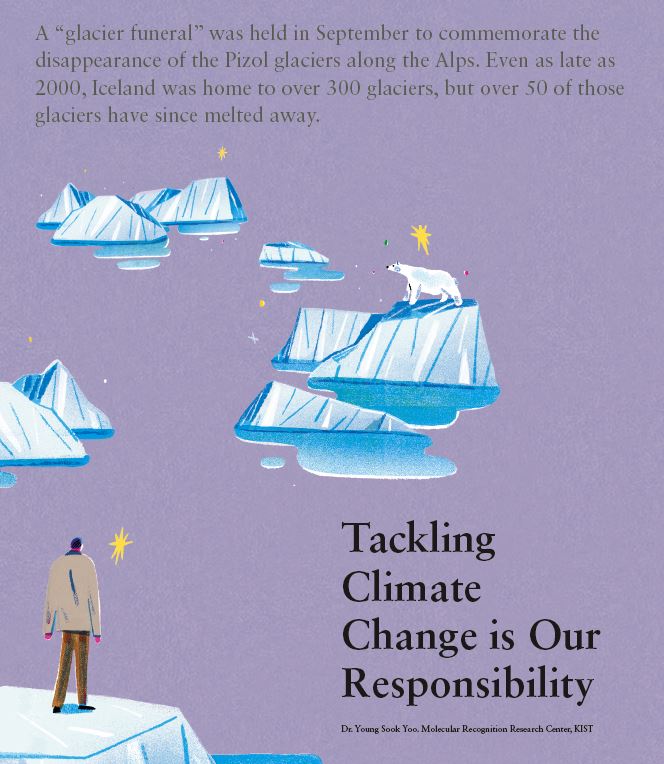 According to the World Meteorological Organization, the highest average temperature years occurred during the most recently recorded four-year period: 2015 through 2018. Temperatures for 2019 will be released in mid-January of 2020. Given that the Earth’s monthly average temperature reached a 140-year high in July of this year, it doesn’t seem likely that 2019 will rank below the top four hottest years.

Global temperature rise has a significant impact not only on the world’s flora and fauna, but also humanity as well. Experts project that 30% of the world’s plant and animal populations will go extinct if global temperature rises two degrees above pre-industrial levels. Low-lying areas in the Arctic are disappearing under water as glaciers retreat and increasing desertification is expected to reduce the area of livable land. Rising sea levels are likely to trigger tsunamis caused by typhoons. We do not feel the immediate effects of climate change. Greenhouse gases are odorless and intangible, but when accumulated, may bring irreversible and catastrophic impacts upon humanity on a scale to rival nuclear bombs.

Fortunately, South Korea has been making efforts to voluntarily curb greenhouse gas emissions and in 2008 announced a national “Low Carbon Green Growth” policy. The government declared to cut GHG emissions voluntarily even though it was not a mandatory reduction country under the Kyoto Protocol. South Korea has been spearheading low-carbon activities by chairing the OECD ministerial meeting on the environment that is convened every 3-5 years.

GTC, established and operated by KIST since 2011, conducts research on policies encouraging the establishment of green technology and promotes collaboration on technology transfer between countries. GGGI supports environmentally sustainable economic development on a global scale and GCF is a fund created to support the efforts of developing countries to reduce greenhouse gas emissions and spur climate action. All three are pivotal for low-carbon policies.

Remarkable progress has been made by the international community as evidenced by the Paris Agreement adopted in 2015 at the UN Climate meeting. Unlike the Kyoto Protocol which limited greenhouse gas reduction obligations to developed countries, the Paris Climate Agreement set a goal to reduce greenhouse gas emissions requiring contributions from all 196 signatories based on each country’s unique situation. Numerous countries, including North Korea, submitted their respective reduction targets with the aim of applying their initiatives after 2020. South Korea plans to reduce its greenhouse gas emission levels by 37%？ (315 million tons) compared to “business-as-usual” (BAU). Back when the Paris Agreement was adopted, President Obama declared that it would be “the most significant turning point in the history of mankind” and the mood was celebratory. However, the subsequent withdrawal of the U.S. and changing domestic energy policies, among other developments, have made things difficult.

Although it might be an uphill battle, we need to implement our own climate response policies. In that sense, it is high time we fully utilize and supply bio fuels in an effort to curb greenhouse gas emissions. Among the different types of bio fuel currently available, bio-heavy oil used to generate electricity is made from disposed raw materials such as used cooking oil, animal and plant fat and oil, by-products from bio-diesel processes, etc. Approximately 350,000 liters of water are needed to purify just one liter of used cooking oil. This means that we can conserve enough water to fill up 23 Soyang Dams if we use used cooking oil as a bio-heavy oil for fuel. This technology is suitable for Korea, a small country with four distinct seasons. Against this backdrop, I am honored to have been named president of the Bio Fuel Forum that officially launched in June and look forward to working with others on intiatives in this important area.

The next decade or two is our last chance to take meaningful steps for change. If we miss this window of opportunity, we may reach a point of no return. We need to devote all our resources to tackle climate change, keeping in mind that it is our responsibility to preserve planet Earth and build a brighter future for the generations to come.

“Quality, Impacts, and Necessity of Research Prioritized over Possibility of Success” 2020-06-30