“Quality, Impacts, and Necessity of Research Prioritized over Possibility of Success” 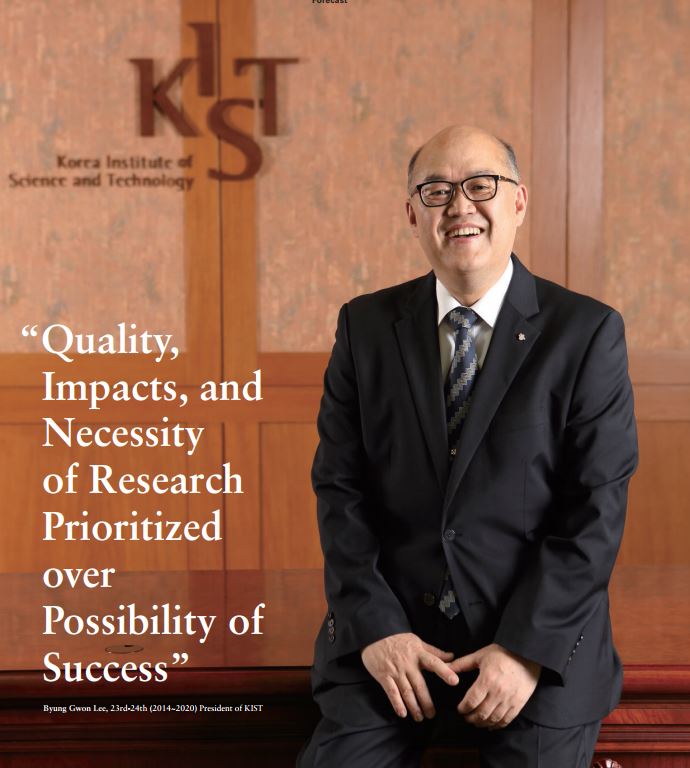 The most frequently asked question during my time at KIST was “How can we translate national R&D success into innovative growth?” This is probably a different way of phrasing public criticism about “why Korea has failed to create a startup boom like Silicon Valley leveraging national cutting-edge research and development?” The multitude of policy recommendations proposed by the government, national assembly, and academia are not the solution either. I had time to really mull over this question while on a trip to Glasgow, U.K., which is the birthplace of James Watt and the steam engine.

James Watt made history when he innovated Newcomen’s steam engine after being commissioned while working as an engineer at University of Glasgow. The steam engine that had disappeared into history came back to life with efficiency and economic feasibility, bringing out revolutionary changes to factories and transportation. However, R&D in Korea tends to stop at dissertations and patents, which seemingly represent successful testing and research results. Research and development must go beyond that to provide direct benefits that are useful and accessible to everyone in the form of revolutionary technology and innovation.

It is now high time that we create R&D culture by nurturing the countless successful fundamental studies out there so that they can translate into innovation. This begins with changing the way we perceive fundamental research ？ going a step further from just creating the seeds for growth, by solving the obstacles ahead for the seed to take root and blossom. This requires wide-ranging follow-up and complementary studies that can help commercialize basic and fundamental research results, in tandem with an immediate structural overhaul of national R&D projects that are currently siloed, lacking uniformity and without a proper pipeline that connects basic and fundamental research to applied and commercialization research.

Improvements to the evaluation system for government-funded organizations in order to encourage creative and bold research is critical. The focus should be on quality instead of quantity, and impact and necessity of the research rather than its possibility of success. A telling example of such high-risk, high-return initiatives is K-DARPA, a national innovative defense technology project that represents KIST’s effort to encourage new and bold research. K-DARPA’s evaluation criteria are mainly related to setting clear targets, assessing potential social impact, etc., which is why researchers dive into studies that can create significant social impact despite the high level of difficulty such studies require.

Improving the evaluation system of government-funded institutes begins with completely changing the way we think about and approach R&D.  The idea that cutting edge technological developments in the age of the 4th industrial revolution require a different approach compared to our current trajectory of basic, fundamental, applied, and commercialization research needs to be embedded from the get go at the design phase of policies. In addition, legal and institutional infrastructure need to undergird new technological expansions in society. The Parliament of the United Kingdom played a critical role when it approved an extension on the patent for the steam engine. This provided James Watt with the opportunity to work with renewed vigor on improving the steam engine. Furthermore, this move by the Parliament sent a clear message that U.K. law recognizes and protects the value and hard work that goes into innovation.

In the late 1700s, the Lunar Society, a monthly gathering of prominent intellectuals in the U.K. scheduled on the day of the full moon, was founded. Erasmus Darwin, grandfather of Charles Darwin, Joseph Priestley who discovered oxygen, and James Watt were all members of the Lunar Society. These esteemed figures gathered to talk about different areas of interest of the time and debated how these ideas could be developed into science and technology that improve our daily lives.

Hongneung Research Complex, where KIST is located, is being revamped as platform for bleeding-edge innovation in order to create an innovative ecosystem in which universities, research institutes, and startups work together to translate the latest research results into actual jobs and value. In fact, the district where this complex is located happens to be called Lunar Valley. I look forward to the achievements that the talented individuals here will bring about in Industry 4.0, much like James Watt did back in history and pave the way for innovation as the members of the Lunar Society did dating back centuries.

Tackling Climate Change is Our Responsibility 2019-12-31