As population ages and with the advancements in medical technology, the number of patients using implanted electronic devices, such as artificial pacemakers and defibrillators, is increasing worldwide. Currently, the batteries of body-implanted devices are replaced by an incision surgery, which may lead to health complications. Accordingly, a new charging technique by wireless energy transfer is emerging that can also be used to charge the batteries of underwater devices, such as sensors, that are used for monitoring the conditions of submarine cables.

The Korea Institute of Science and Technology (KIST, President: Seok-Jin Yoon) announced that a research team led by Dr. Hyun-Cheol Song at the Electronic Materials Research Center developed an ultrasonic wireless power transmission technology that can be applied in the above-mentioned research areas.

Electromagnetic (EM) induction and magnetic resonance can be used in wireless energy transfer. EM induction is presently being used in smartphones and wireless earphones; however, its usage is limited because EM waves cannot pass through water or metal, resulting in short charging distance. In addition, this method cannot be easily used to recharge implanted medical devices as the heat generated during charging is harmful. The magnetic resonance method requires that the resonant frequencies of the magnetic field generator and transmitting device are exactly the same; moreover, a risk of interference with other wireless communication frequencies, such as Wi-Fi and Bluetooth, exists.

The KIST team, therefore, adopted ultrasonic waves as an energy transmission medium, instead of EM waves or magnetic fields. Sonar, which uses ultrasound waves, is commonly used in underwater environments, and the safety of using ultrasonic waves in the human body has been guaranteed in various medical applications, such as organ or fetal condition diagnosis. However, the existing acoustic energy transfer methods are not commercialized easily due to the low transmission efficiency of acoustic energy.

The research team developed a model that receives and converts ultrasonic waves into electrical energy using the triboelectric principle that allows for the conversion of small mechanical vibrations into electrical energy effectively. By adding a ferroelectric material to the triboelectric generator, the ultrasonic energy transfer efficiency was significantly improved from less than 1% to more than 4%. Moreover, charging of more than 8 mW power at a distance of 6 cm was possible, which was sufficient to simultaneously operate 200 LEDs or to communicate Bluetooth sensor data underwater. In addition, the newly developed device had high energy conversion efficiency and generated marginal amounts of heat.

Dr. Song explained the significance of the results as follows: “This study demonstrated that electronic devices can be driven by wireless power charging via ultrasonic waves. If the stability and efficiency of the device are further improved in the future, this technology can be applied to supply power wirelessly to implantable sensors or deep-sea sensors, in which replacing batteries is cumbersome.” 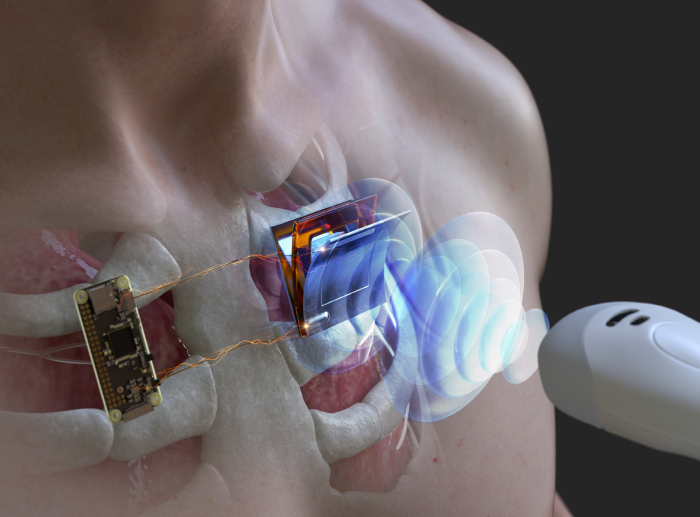 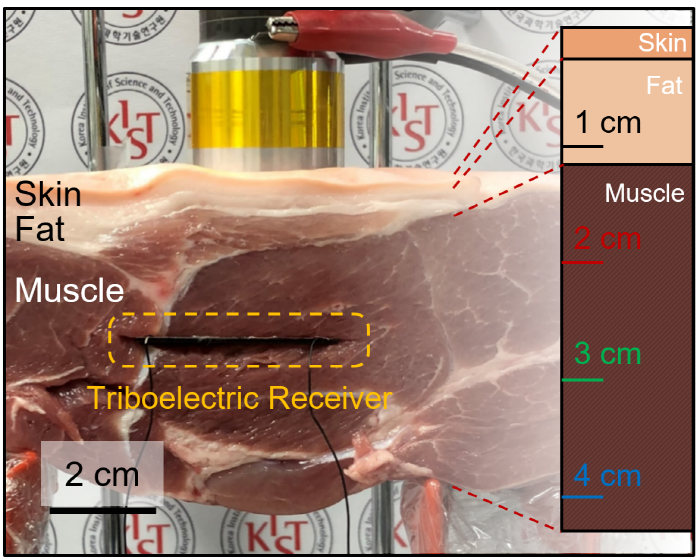