The importance of ‘carbon neutrality’ is growing more than ever, as climate change caused by global warming threatens even the human right to live. The Republic of Korea has declared 'carbon neutrality by 2050' and is exerting efforts to reduce greenhouse gas emissions. In order to realize carbon neutrality, along with green hydrogen production that reduces the generation of carbon dioxide, CCU technology that utilizes already generated carbon dioxide is essential.

In order for these two technologies to be effective in reducing greenhouse gas emissions, the energy used must be reduced by increasing the activity of water oxidation electrode which induces an electrochemical reaction. For this purpose, attempts have been made to understand the electronic structure of the surface of the catalyst while the reaction continues. However, due to the difficulty in conducting an experiment in an ultra-high vacuum (UHV) condition, it was only indirectly estimated through computational calculations.

At the Korea Institute of Science and Technology (KIST, President: Seok-Jin Yoon), Dr. Hyung-Suk Oh and Dr. Woong Hee Lee from the Clean Energy Research Center and Dr. Keun Hwa Chae from the Advanced Analysis and Data Center developed an operando soft X-ray based absorption spectroscopy based on a radiation accelerator (10D XAS KIST beamline, ) for the first time in Korea. KIST announced that this research has developed a new strategy to fabricate electrode by observing and analyzing the surface electronic structure during the reaction of the water oxidation electrode applied to 'hydrogen production and conversion of carbon dioxide'.

The research team found that general cobalt was reconstructed during the reaction, through measuring the electronic structure and spin states of the electrode surface by using accelerator-based soft X-ray absorption spectroscopy under the UHV condition. A method to improve the performance of the water oxidation electrode, through this discovery of the change in the electrode material. Thermodynamically, cobalt is prone to be in a tetravalent oxidation state under oxidation conditions, and its water oxidation activity is very low. It is necessary to maintain a trivalent oxidation state in order to maintain high water oxidation activity, that the process developed by the research team enables to obtain  the 3.2 oxidation state and high activity. The developed electrode has a more than 1000 times larger electrochemical surface area compared to a commercial cobalt electrode, and move than 10 times improvement in hydrogen production performance when applied to an actual water electrolysis system.

Dr. Oh said, “By developing an operando soft X-ray absorption spectrometry based on a radiation accelerator, we have taken one step further in understanding the properties of catalyst materials and improving their performance. This is an essential technology for the artificial photosynthesis, and is expected to be of great help in improving the performance of the water oxidation electrode, which is an important technology for green hydrogen production and electrochemical reconstruction.”

The operando soft X-ray absorption spectroscopy based on radiation accelerator 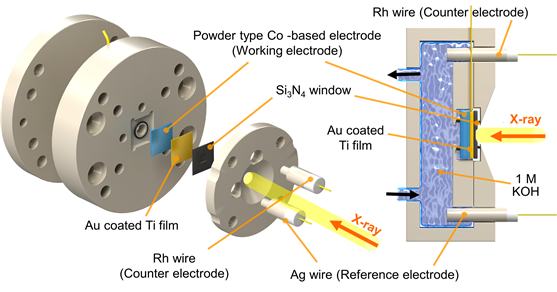 TEM and SEM images of the catalyst