Nanomachines for Direct Penetration of Cancer Cells by Folding and Unfording

Proteins are involved in every biological process, and use the energy in the body to alter their structure via mechanical movements. They are considered biological 'nanomachines' because the smallest structural change in a protein has a significant effect on biological processes. The development of nanomachines that mimic proteins has received much attention to implement movement in the cellular environment. However, there are various mechanisms by which cells attempt to protect themselves from the action of these nanomachines. This limits the realization of any relevant mechanical movement of nanomachines that could be applied for medical purposes.

The research team led by Dr. Youngdo Jeong from the Center for Advanced Biomolecular Recognition at the Korea Institute of Science and Technology (KIST, President Seok-Jin Yoon) has reported the development of a novel biochemical nanomachine that penetrates the cell membrane and kills the cell via the molecular movements of folding and unfolding in specific cellular environments, such as cancer cells, as a result of a collaboration with the teams of Prof. Sang Kyu Kwak from the School of Energy and Chemical Engineering and Prof. Ja-Hyoung Ryu from the Department of Chemistry at the Ulsan National Institute of Science and Technology (UNIST, President Yong Hoon Lee), and Dr. Chaekyu Kim of Fusion Biotechnology, Inc.

The joint research team focused on the hierarchical structure of proteins, in which the axis of the large structure and the mobile units are hierarchically separated. Therefore, only specific parts can move around the axis. Most existing nanomachines have been designed so that the mobile components and axis of the large structure are present on the same layer. Thus, these components undergo simultaneous movement, which complicates the desired control of a specific part.

A hierarchical nanomachine was fabricated by synthesizing and combining 2 nm-diameter gold nanoparticles with molecules that can be folded and unfolded based on the surrounding environment. This nanomachine was comprised of mobile organic molecules and inorganic nanoparticles to function as large axis structures, and defined movement and direction in such a manner that upon reaching the cell membrane, it resulted in a mechanical folding/unfolding movement that led to the nanomachine directly penetrating the cell, destroying the organelles, and inducing apoptosis. This new method directly kills cancer cells via mechanical movements without anticancer medication, in contrast to the capsule-type nanocarriers that deliver therapeutic drugs.

Subsequently, a latch molecule was threaded onto the nanomachine to control the mechanical movement to selectively kill cancer cells. The threaded latch molecule was designed to be released only in a low pH environment. Therefore, in normal cells with a relatively high pH (approximately 7.4), the movements of nanomachine was restricted and they could not penetrate the cell. However, at the low pH environment around cancer cells (approximately 6.8), the latch molecules were untied, inducing mechanical movement and cell penetration.

Dr. Jeong said, “The developed nanomachine was inspired by proteins that perform biological functions by changing their shape based on their environment. We propose a novel method of directly penetrating cancer cells to kill them via the mechanical movements of molecules attached to nanomachines without drugs. This could be a new alternative to overcome the side effects of existing chemotherapy.” 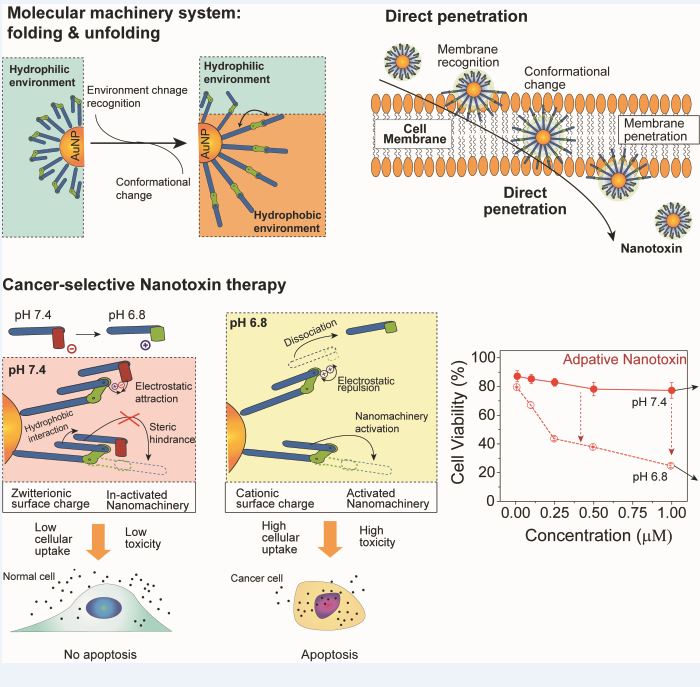 Nanomachine, developed by KIST-UNIST joint research team, which selectively penetrates and kills cancer cells, and its mechanism of action

The nanomachine directly penetrates cancer cells and kills them by destroying their organelles via mechanical movements of the molecule.