In nature, the cell membrane has a unique function of protecting the internal from the external environment and communicating outside by sensing the external chemical or physical stimuli like the most precise biosensor for life. The cell membrane, which contains a hydrophilic part that is miscible well with water on the one side and a hydrophobic part that is not miscible well with water on the other, opens and closes ion channels like a water faucet and converts a physicochemical stimulus into an electrical signal which is then transmitted to cells. Active research worldwide on biosensors that can mimic the cell membrane’s excellent sensing has been suggested. However, till recently, the limited ability of an artificial cell membrane structure to only last a maximum of 5 days has been a hurdle.

However, the durability of at least one month is essential for life science research utilizing artificial cell membranes and the practical commercialization of biosensors. To extend the limit of 5 days of stability of an artificial cell membrane, the KIST research team focused on a material called block copolymer (BCP). A BCP is a macromolecule consisting of two or more blocks, which can be repeatedly aligned as a long row of blocks of counteracting properties that mimic the hydrophilic and hydrophobic nature of the human cell membrane.

Dr. Kim’s research team developed a technology that regularly arranges tens of thousands of holes with a diameter of 8 μm (micrometer) on a silicon substrate and inserts a specific amount of BCP solution into each hole through surface treatment, and dries it. Then, a soap bubble-shaped, an elongated oval-shaped, or a thin tubular-shaped BCP double-layer structure is tunably created by applying an electric field between the upper plate electrode of the microfluidic channel and the lower silicon substrate. This process led to the discovery of the possibility of maintaining a structure with a specific shape depending on the concentration of the solution and the applied electric field and frequency. This suggests a means to freely control the size and shape of artificial cell membranes, from a sphere, like a soap bubble, to a cylinder, like a tube.

The KIST research team finally created an artificial cell membrane that can be kept stable for over 50 days by filling the outside of a three-dimensional double-layered BCP structure with a porous hydrogel that exhibits excellent elasticity and resilience characteristics similar to that of a human body substance. In addition, an artificial organ structure was produced by replicating an epithelial cell in the small intestine, which consists of thousands of tubular structures (cilia) using a BCP double-layered structure, proving its usage potential as a material for artificial organs through binding with β-galactosidase. 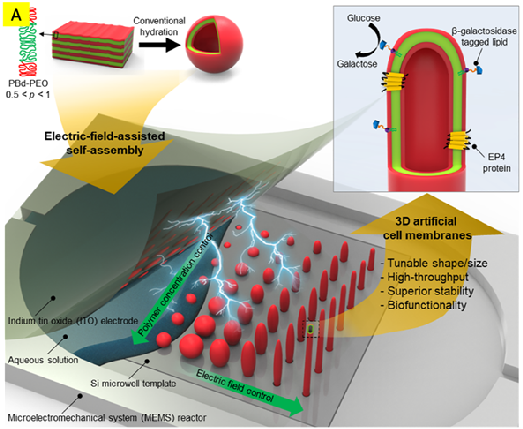 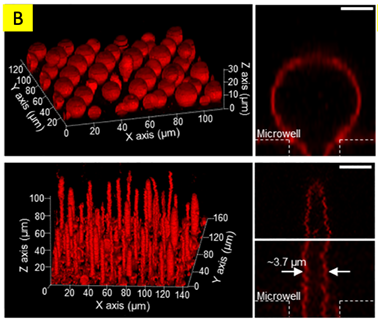 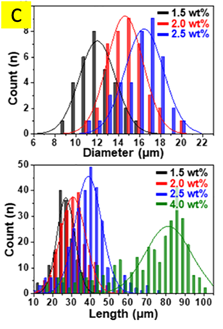 Size distribution of each spherical and tubular structure