The Korea Institute of Science and Technology (KIST; President: Seok-Jin Yoon) reported that the research group of Dr. Hyung-Suk Oh at the Clean Energy Research Center has developed a technology that stably converts carbon dioxide into useful liquid compounds (formate) by performing high-volume synthesis with fluorine-doped tin oxide catalysts. Also called methanoic acid, formate is a basic chemical raw material used in various industries such as food processing, preservatives, dyeing agents, plasticizers, snow removal agents, and cure retardants owing to its distinctive sour taste, anti-bacterial properties, and its ability to control pH. In recent years, it has also been in the spotlight as a raw material for eco-friendly biodegradable plastic.

Because most formate is currently produced via the thermo-chemical reaction of fossil fuels, carbon dioxide emissions are inevitable during the manufacturing process. While it can be manufactured in an eco-friendly manner if carbon dioxide is directly converted into formate via an electro-chemical reaction, it would be necessary to increase electrode material performance responsible for converting the gas to a liquid phase, and to ensure durability, which allows electrodes to function stably for a long time.

The KIST research team focused on the fact that fluorine-doped tin oxide has a lower tendency than regular tin oxide to metalize and maintain the carbon dioxide conversion activity of catalysts. By using a relatively simple method of doping fluorine during the synthesis of Tin oxide, the researchers developed an electrode that maintains high formate conversion activity in a stable manner. The fluorine-doped tin oxide electrode manufactured by the proposed method was shown to have a formate production rate that is four times that of an existing commercial tin oxide electrode, and its durability improved by at least 100 times, so its performance is maintained even during a long-term reaction time of over a week.

Alternatively, formate is one of the most promising candidates as a liquid organic hydrogen carrier (LOHC), which is a hydrogen storage material that bonds hydrogen with a third substance to enable storage and transportation without the need to rely on expensive heavy-duty specialized containers. The core of LOHC technology is to secure liquefied compounds with high storage capacity for hydrogen and safety, even when exposed to external factors; formate has this characteristic. With the application of the technology developed by the researchers, as the environmental and economic concerns (which were previously considered weaknesses) will be resolved simultaneously, a reevaluation of its competitiveness is expected against other candidate materials such as ammonia.

According to Dr. Hyung-Suk Oh, "By developing highly efficient electrodes, we can build a continuous system mass-producing formate from carbon dioxide." "Not only is this a direction for Carbon Capture, Utilization and Storage (CCUS), but also it is a "killing two birds in one stone" kind of technology that provides large amount of formate ideal for hydrogen storage. We expect it to contribute greatly to carbon neutrality in the future as the renewable energy supply increases and the hydrogen-based society advances, making the system economically feasible." 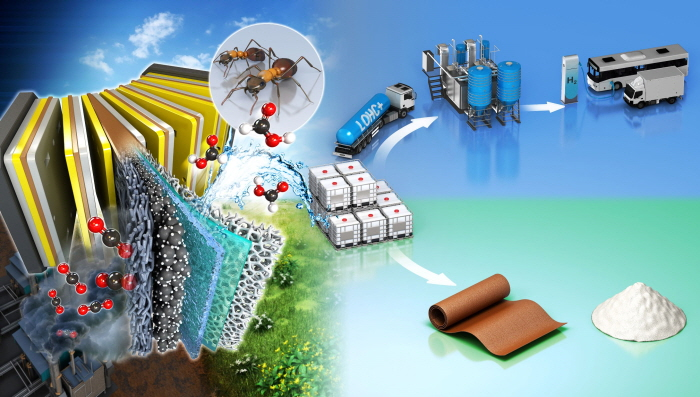 Rewriting the history of K-carbon fiber manufacturing with carbon nanotubes