Skin-like polymeric coatings are applied to the surfaces of automobiles, ships, and buildings to protect them from the external environment. As it is difficult to determine whether the currently used coatings are already damaged or not, these non-reusable coatings must be regularly replaced, leading to a large amount of waste generation and high disposal costs.

Existing studies on damage-reporting and self-healing polymeric coatings involve the use of extremely small capsules containing functional agents. However, these capsules cannot be used again for subsequent damage detection and self-healing if broken. The KIST research team has developed a thermoset polymer that can recover its original chemical structure after being disrupted by an external stimulus, thereby allowing this material to self-report damage and self-heal multiple times.

In this study, a mechanochromic molecule, which changes color when an external force is applied due to a specific bond cleavage, and a thermoset polymer containing a molecule that can be separated and re-formed by temperature were synthesized. When a force is applied to a mechanochromic molecule, a certain bond is broken, thus changing into a form that can exhibit color. The damaged part of the synthesized polymeric coating changed to purple. When a temperature of 100 °C or higher was applied, the material became processable and was physically healed and became colorless. The research team used molecular dynamics simulations to predict and confirm that only certain desired chemical bonds are selectively cleaved when a mechanical force is applied to yield a colored structure; the functionality was implemented by synthesizing the actual coating agent.

The novel multifunctional polymeric coating developed herein can be extensively used in automotive, marine, defense, timber, railway, highway, and aerospace industries, and can significantly contribute toward the reduction of industrial waste. In addition, it can be used as an artificial skin for robots, such as humanoids, since its functionality is similar to that of skin and it does not require an external energy source.

Dr. Tae Ann Kim of KIST said, “This study reports a method for the simultaneous realization of damage detection and self-healing technology without any external agents such as capsules.” He added, “However, even if repeated self-healing is possible, it cannot be used permanently. Therefore, additional research is underway to transition materials that have reached their lifespan into materials that are harmless to the environment or convert them into a re-cyclable form.” 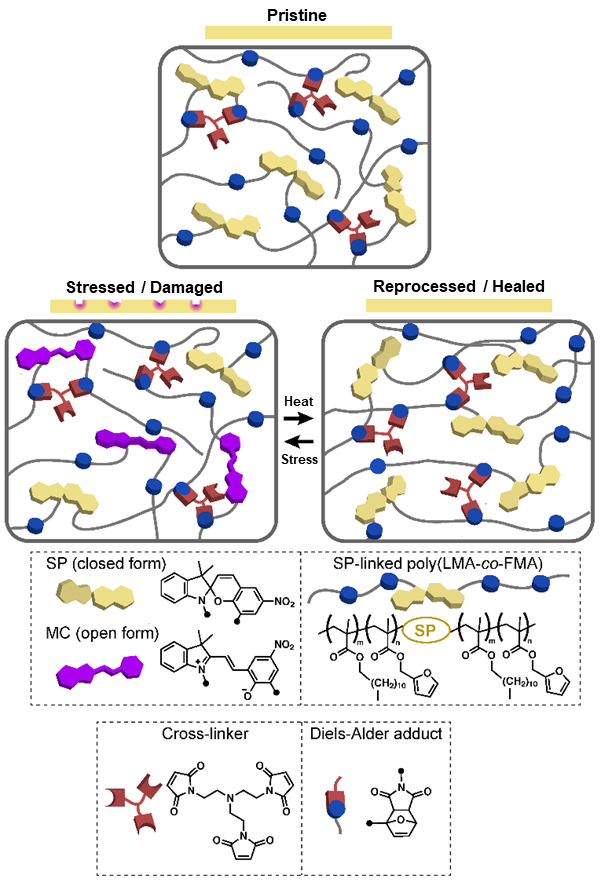 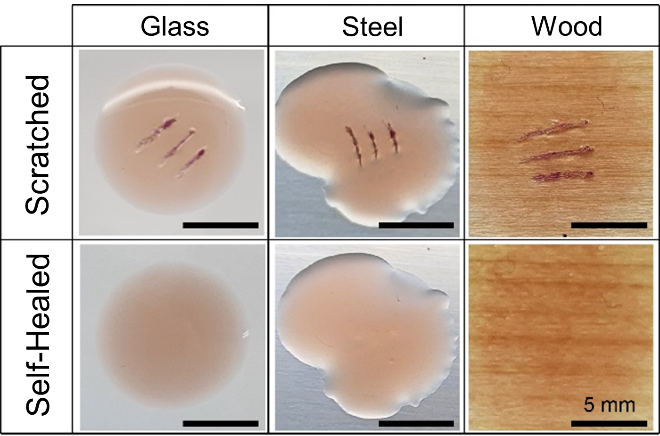