Clean water is essential for human survival. However, less than 3% of fresh water can be used as drinking water. According to a report published by the World Meteorological Organization, there is scarcity of drinking water for approximately 1 billion people worldwide, which is expected to rise to 1.4 billion by 2050.

Seawater desalination technology, which produces fresh water from seawater, could solve the problem of water scarcity. At the Korea Institute of Science and Technology (KIST, President: Seok-Jin Yoon), a research team led by Dr. Kyung Guen Song from the Center for Water Cycle Research, have developed a hybrid membrane distillation module that combines solar energy with hydrothermal heat pumps to reduce thermal energy consumption during the desalination process.

Reverse osmosis and evaporation methods are relatively common seawater desalination processes; however, these methods can operate only at high pressures and temperatures. In comparison, the membrane distillation method produces fresh water by utilizing the vapor pressure generated by the temperature difference between the flowing raw water and treated water separated by a membrane. This approach has the advantage of low energy consumption, as fresh water can be generated at pressures of 0.2–0.8 bar, which is lower than atmospheric pressure, and temperatures of 50–60℃. However, large scale operation requires more thermal energy. Thus, research studies are required to reduce the use of thermal energy for commercial operation.

The membrane distillation involves simultaneous mass and heat (energy) transfer. It is divided into a direct contact membrane distillation (DCMD) and an air gap membrane distillation (AGMD) based on the modes applied to the treated water side of membrane to generate vapor pressure differences, which are the driving force. For high energy supply, the mode of producing water by direct contact of raw water of high temperature and treated water of low temperature to the membrane surface (i.e., DCMD) is beneficial. In contrast, for low energy supply, the efficiency is greater if the heat transmitted (heat loss) is reduced by air gaps, rather than direct contact between raw water and processed water (see Figure 1). Thus, the mode that generate water by condensing over a cold surface and which maintain air gaps between the membrane and the condensation surface (i.e., AGMD) are preferred.

The KIST Research Team developed a hybrid desalination technology by conducting on-site tests for 1 month to compare the system performance and economy using solar energy and hydrothermal heat pumps. When the system operated in parallel with solar energy, production increased by 9.6% (see Figure 2) and energy usage was reduced by 30% (see Figure 3) compared to the membrane distillation method using only hydrothermal heat pumps. In addition, comparison of the consumption of thermal energy depending on the presence of solar energy showed that the efficiency of the membrane distillation plant process increased by up to 17.5% when solar energy was used as an additional heat source.

According to Dr. Song, “The hybrid desalination technology we developed can be considered a method to supply water to some industrial complexes and island areas facing water scarcity as it can reduce the energy consumption required to generate fresh water. We expect this technology to be applied to significant water supply facilities in the Middle East and Southeast Asia where the annual solar radiation quantity is 1.5 times that in Korea." He added, “Membrane distillation is not significantly affected by raw water quality, so it will be possible to supply drinking water to areas where raw water quality became heavily contaminated due to water pollution and areas where heavy metal detection is high." 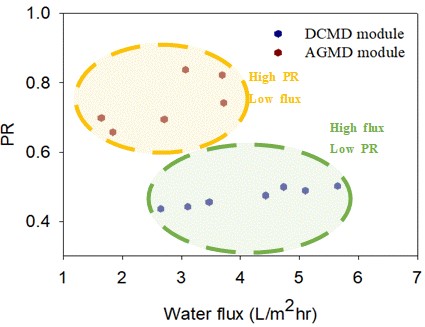 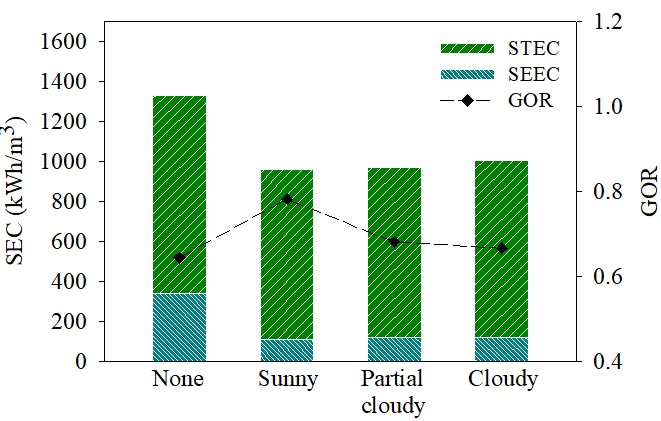