Development of New Technology for Wastewater Treatment for Semiconductor Production

Alcohols are used to remove impurities on the surface of semiconductors or electronics during the manufacturing process, and wastewater containing alcohols is treated using reverse osmosis, ozone, and biological decomposition. Although such methods can lower the alcohol concentration in wastewater, they are ineffective at completely decomposing alcohols in wastewater with a low alcohol concentration. This is because alcohol is miscible in water, making it impossible to completely separate from alcohol using physical methods, while chemical or biological treatments are highly inefficient. For this reason, wastewater with a low alcohol concentration is primarily treated by diluting it with a large amount of clean water before its discharge.

The Korea Institute of Science and Technology (KIST, President Seok-Jin Yoon) has announced that a research team led by Dr. Sang Hoon Kim and Dr. Gun-hee Moon of Extreme Materials Research Center developed a photocatalyst that can completely decompose a trace amount of alcohol in water within a short duration by adding a very trace amount of copper to iron oxide, which is used as a catalyst during the advanced oxidation process.

If the photocatalyst developed by the KIST is used for water treatment, water resources can be saved. The research team applied the photocatalyst to wastewater from a semiconductor factory to prove that alcohol decomposition levels similar to those observed in the laboratory could be achieved in industrial practice. 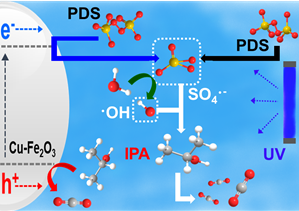