- Expected to contribute to next-generation protective suits and equipment, as well as to detoxification treatment of chemical leakage

Highly toxic organic compounds are colorless, odorless, and can be used to perpetrate massacres in very small amounts; thus, their use is prohibited by the Chemical Weapons Convention worldwide. Nevertheless, there have been reports of chemical weapon use recently, and therefore, there is an emerging need to develop protective materials against such threats. Currently, activated charcoals are used in protective suits and gas masks to remove toxic chemicals by absorption, but they have their own problems, such as secondary contamination; thus, the development of detoxification catalysts that can fundamentally remove toxicity is required.

The Korea Institute of Science and Technology (KIST, President Yoon Seokjin) announced that the research team led by Dr. Baek Kyung Youl, a senior researcher at the Materials Architecturing Research Center, succeeded in developing a detoxification composite that can be easily processed into a coating material, continuing on their success in developing a nano-based detoxification catalyst in 2019.

The previously developed metal-organic framework (MOF) detoxification catalyst had high performance, but was in the form of particles that break like sand; thus, it had not been put into practical use in coating military uniforms and equipment. To overcome this problem, Baek’s research team designed a functional polymer and mixed it with a detoxification catalyst to develop a detoxification technology that can be processed into films and fibers while maintaining its properties.

The research team developed a new functional polymeric support that improves processability while maintaining the high reactivity of the previously developed nanometer-level zirconium (Zr)-based detoxification catalyst, and used it to make a mixed compound that can be used as a detoxification catalyst. It was confirmed to be practically applicable in a detoxification performance test using an actual chemical weapon, the nerve agent soman (GD), on military uniforms and equipment coated with the compound.

Dr. Baek of KIST said, “What is different about this compound is that it can remove the toxicity of chemical weapons easily and coat large areas quickly using a simple spray process rather than the conventional electrospinning method”, and that “It is expected that the spray coating can be applied to military uniforms and equipment to prevent contamination and be used to remove toxic agents from equipment, protecting the lives of soldiers and civilians from highly toxic chemical agents.”

This study was conducted with the support of the K-DARPA project of KIST and in cooperation with KIST’s Department of National Security, Disaster and Safety Technology. The results of the study have been published online in the latest issue of ACS Applied Materials & Interfaces (IF: 10.383, JCR Top 14.05%).

[Fig. 1] Schematic diagram of the strategy for the development of coating materials using the functional polymeric support and nano-detoxification catalyst and the decomposition of chemical agents 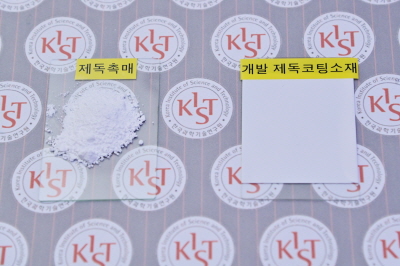 Development of New Technology for Wastewater Treatment for Semiconductor Production

Coffee grounds can be turned into a semiconductor wastewater purification material